The following is a cautionary tale, not so much of star crossed lovers nor two cities. It’s not even a story about a man named Jed trying to keep his family fed, but rather a story about nerds, nerd-dom, and a meteoric descent from a yet-to-be-paid-for-how-many-deferments-can-they-give ivory tower (soon to be seen under the Craigslist missed connection ad with the heading: Philosophy degree for sale or barter….barely used).
Ever since I was young, I’ve been playing Jeopardy. My dad and I would sit down every night at 7:00 and duke it out. Anyone who has ever lived with me, or even been near a tv in my company at that time, knows that I’m physically incapable of having any kind of meaningful dialogue. It consumes me. I don’t really care if there are people around or if I’m playing alone. I’ll chirp in the form of questions not so much all day erry day but all day as long as it’s between 7 and 7:30 PST.  For that ephemeral half hour, it’s like all of the things I once read or studied that people said I would never use or need come rushing back in a funhouse mirrored carnival of minutiae that flirts on the tip of my tongue. Ready to fire out into the city around me with the velocity and furor of  a sheer hollow point randomness caliber.
When I went to Mills, there was a common area in one of the dorms that had a tv. 7:00 was typically dinner time, so I usually had it all to myself. Like Gollum…hunched over my precious remote. One night, all of the stars aligned and there laid out before me in blue were all the categories in my wheel house. Both rounds. On that fall evening, I was one with Cliff Claven.
Nobody can play Jeopardy without blurting the answers out loud. I tried it once.  It’s like walking without swinging your arms. I don’t think it’s physically possible for extended lengths of time. While in the Zen zone of barking answer after answer, I didn’t realize that the crew team had walked in and were standing behind the sofa where I was sitting. I don’t know how long they were there (I was a Shaolin monk of nerdville at that point), but as the final jeopardy music sparkled in the twilight around me, the last answer escaped my mouth in a twinkling decrescendo of potent potable perfection. One of the crew girls burped. Like a dude. I think it even rattled the light fixture.  And the moment was gone.
I’ve been chasing that night ever since. Like the fish that got away…or the lottery…or the girl from high school…or a picture of the Yeti. I was one with the quadratics and I keep trying to recreate that.
Along came the internet and within a few short years, online tests were given annually to screen contestants. I don’t know how they used to find people. Sometimes I imagined they had scouts that would sit around bookstores and wait for someone to be reading something heady or say something super profound, and they’d shoulder tap them with 2 tickets to LAX. Crikey. Not kidding though, it’s my favoritest time of year. There are 50 questions in 50 different categories and you have 15 seconds total to read and then type in the answer. The first year I tried was the antithesis of my glorious Mills moment. All sports, modern television series, and pop culture type questions. I bombed. Terribly. Second year? A little better. But the pop culture and modern music questions slayed me once again.
So this year I decided to take a different tact. I watched a brief moment of the AMA’s and Grammy’s. Didn’t recognize a single act and the music was so awful I had to turn each of them off. There was a dude in a hipster suit who sounded like he’d just graduated from the critically acclaimed Eminem for dummies online program, kinda dancing, not really singing or rapping, and then somehow for some odd reason his manager thought it would be a good idea to bring out some dancers dressed like freakin Chaka to leap in arrhythmic circles around him. That was officially the end of my modern music experiment, but I desperately clutched out at the hope that maybe in those excruciating forays somehow I would have taken in something…anything…through osmosis.
This year was the 3rd time to take the goddamn test. There were a few things I didn’t know (opera…sports…ballet…and modern fiction which I default answered Verdi, Buccaneers, swan lake, and ‘who actually reads new fiction?’). When the last question came up, I was feeling ok. Civil War was the category. I wrote a report about it in the 6th grade.  I got an A because I soaked the paper in old tea bags which made it look super authentic.  I don’t remember the question but it was something about the nickname of this general blah blah blah. Jackson. Goddamn Thomas Jonathan Jackson. They didn’t ask for the nickname, but I figured I would add it (and maybe detract from the fact I didn’t know the name of some Adele song….I’ve never heard her music…never been that interested…the world could be filled with rotten avocadoes and if someone offered to lower a rope in exchange for the name of one of her songs, I’d be stuck like the old Pitfall game swinging from brown avocado strings for the end of my days).
Did I write Stonewall? Noooooooooooo.
My dear friends, in my smug and giddy attempt to recapture a long ago evening, I wrote Stalwart. General Stalwart-Laura-really wtf you should stick to Wheel of Fortune or the Price is Right at this point in life-good thing you spent 2 hours researching the history of the Supreme Court -Effing Jackson.
*sigh*
With this I lovingly conclude the cautionary tale of the dark side of nerddom,
Turd Ferguson 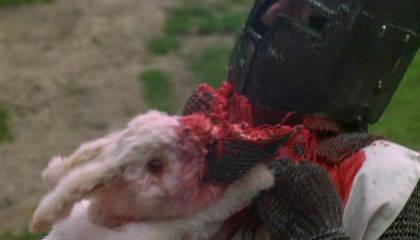 I just found a bag of poems I’d written over the years.  Some of them survived my bunnies’ nom nomalypse.  Some have all of the first or last or middle parts completely chewed away.  Others are mainly non magnetic refrigerator phrases with hair stuck to them.  That’s where interpretive dance comes in handy.  Picture me…and probably a one finger salute…and maybe an old Ice Cube song.  For some reason he’s been in the playlist recently.  Here is one that was mostly intact.  ish.

Editor’s note:  If Monty Python’s Holy Grail ever comes up non sensically, it’s because I’ve absorbed it through osmosis.  It makes more sense to me than most things.  The world would be a better place if we all rode invisible horses and had minstrels

More than once into breathlessness.

wishing it were glass

because scars seem to have a way of making the journey

On the outside anyways.

I don’t remember her ever smiling at me

In a way that seemed to ask:

You sure you want to go down that road again?

I came in a different way this time

where the angles aren’t as steep.

A man with no teeth used to stop by here

to ask what I’d become.

I heard the needle was still in his arm two weeks later.

They found him and a note

that said only that the light was changing.

Learning about love’s role in life

requires winding through the finer times.

Mastering the art of falling into the space

where the moon holds her tiniest secrets close.

Just beneath the skin surface

as though a small flower were planted

to mark the passage of the times nobody ever speaks about.

Those scars are ones we hide even from ourselves.

Learning about love and life

necessitates the mirror being touched and touched again

from the inside out.

And sometimes not knowing what will fall away or who

makes you better at being quiet.

Most people really only turn up for the afterparty.

I trace circles in the sand now.  Try to write my name in spaghettios.